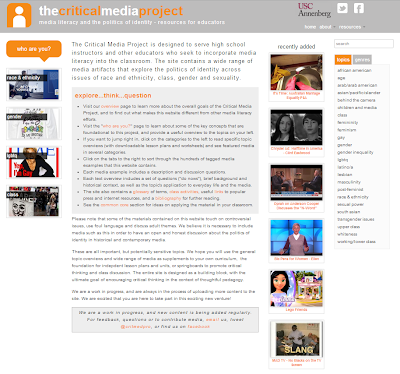 The Media and me

As a reflection exercise, ask students to consider what makes up their identity and which facets of their identity are most important to them (sex, race, ethnicity, age, socio-economic class, sexual orientation, nationality, religion, etc.). Then ask students to think about how their identity has potentially been shaped by the media. Have each student bring in or identify a piece of media that has personally impacted them. This could be done periodically throughout a unit or semester, as homework or a blog. For discussion:

Have students re-view a TV show they regularly watch or view some of the media examples on this site and list all the stereotypes they see. This could also be designed as a multi-day journal assignment that encompasses all media viewed outside of school. For discussion:
"You Decide"

Transcribe the action and dialogue from a scene in your favorite movie. Rewrite the scene by changing the gender, race, class or sexual orientation of the protagnoist. Perform the scene in class and compare it to the original. For discussion:

Antenna: A collectively authored media and cultural studies blog committed to timely yet careful analysis of texts, news, and events from across the popular culture spectrum. The site regularly responds to new works and developments in television, film, music, gaming, digital video, the Internet, print, and the media industries.
CulturalStudies Podcast: podcasts featuring conversations with artists, writers, intellectuals, workers about the politics of culture.
Flow: An online journal of television and media studies launched in October 2004. Flow’s mission is to provide a critical forum where scholars, teachers, students, and the general public can read about and discuss the changing landscape of contemporary media at the speed that media moves.
In Media Res: website dedicated to experimenting with collaborative, multi-modal forms of online scholarship, and to promote an online dialogue amongst scholars and the public about contemporary approaches to studying media. The site presents theme weeks curated by media scholars.
Sociological Images: website designed to encourage all kinds of people to exercise and develop their sociological imagination by presenting brief sociological discussions of compelling and timely imagery that spans the breadth of sociological inquiry.

Common Sense Media
Educational Equity Compliance: This site details student rights regarding equal access to educational programs and activities at schools within LAUSD, offering downloadable PDFs on bullying, sexual harassment and other discrimination that may come up in school context.
FAIR: Fairness and Accuracy in Reporting is a watchdog group offering well-documented criticism of media bias and censorship since 1986.
National Association of Media Literacy Education
CriticalMediaProject
MediaLiteracy