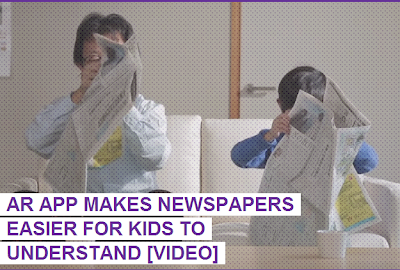 Tokyo Newspaper (aka Tokyo Shimbun) partnered
with the agency Dentsu Tokyo to create an augmented
reality mobile app that would make reading the
newspaper much more engaging and easy for children.
The brief was to make traditional newspapers more appealing
to kids, which can lead to more family discussions, and also
contribute to the child’s education and learning. The challenged
faced by Dentsu, is that newspapers are usually not made for
children. The agency had to come up with a different media
platform that would be more interactive.

The mobile app uses augmented reality to have animations,
and cartoons appear over articles. By pointing the phone’s
camera over a bulk of text, Kanji characters were replaced
by Hiragana characters that made the article to read.
Some articles featured pop-up characters with commentaries,
while others included animated headlines.
The Tokyo AR app can be download for free on iTunes,
and has already received positive reviews from parents.
Watch the video below for a product demonstration
of the app:
Tokyo AR app
Fonte: http://www.psfk.com/2013/01/ar-newspaper-app-japan.html
Dicas Jornal