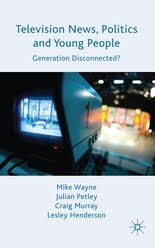 Para quem estuda o tema mídia e jovens leitores, foi lançado o livro "Televisions News, Politics and Young People: Generation Disconnected?", de Mike Wayne, Julian Petley, Craig Murray, Lesley Henderson, editado pela Palgrave.
A aprensentação do livro é a seguinte: "Why are young people alienated from television news? This book argues that contemporary trends indicating deepening disconnection from news about public life reflect problems both with the way television news covers politics - which is the single biggest item on the news - and with the nature of politics itself under neoliberal capitalism.
The authors explore the representation of young people and politics on television news and suggest that there are links between these representations and the reason why young people are turned off news programming. They ask both broadcasters and young people what they think can be done to address this issue, and examine the way that young people consume news. The book concludes that the problem is deep-rooted and requires profound changes both in our political culture and in the culture of television news".
Esperamos em breve conseguir o livro para colocar nossas observações!
Livros